As part of our pre-camp Fringing activities, the Mascot and I attended a late-night performance of the Dungeons and Dragons Improv show. 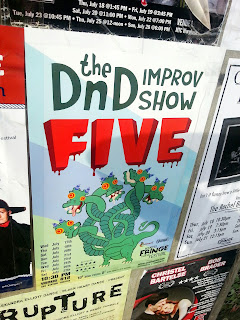 This was our third show and, just like our previous ones, it did not disappoint. The cast was as clever and silly and quick-witted as ever, but with a whole new set of characters (and a few guest stars.) My favourite character, Cosro the Terrible, wasn’t a part of this production, but I was happy because the same actor was back as Taxx, a thoroughly lovable (and thoroughly out-of-it) wizard.


The action and laughs were non-stop and my only complaint* about the whole show is that an hour was too short. But, as they say “you gotta leave ‘em wanting more”… which is why I have plans (and much-coveted tickets) to see the show again tonight!


Our review: 4 geeky thumbs up!


*My other complaint had nothing to do with the show, but OHMYGOD, the girls behind me were so vacuous that my hair was blowing back.

Free Press Review
FP Rating *****
Average Reader Rating ****1/2
Oh, this little show’s grown up so fast — five years old already and still with mostly the same outrageously funny cast.
Heck, we suspect the 2013 edition of the nerdalicious DnD Improv Show features the best mix of characters yet, a Game of Thrones-y bunch, from the noble Sir Gregory Gallahad (dashing Toby Hughes, natch) to the adorable dragon Deloris (Katy Bennett, cheekily stealing the show in her best role of this series). There’s also a deliciously sinister talking chicken.
Look, it doesn’t take a bowl of magic pipeweed to understand why DnD sells out every time: take 14 of the best improv comedians in Winnipeg (Fraz Wiest, who plays zonked-out wizard Taxx, might actually be the funniest person in the city), give ’em swords and sorcery and decide their fate with dice. If you like awesome things, find a way to come and play.
— Melissa Martin
Posted by Unknown at 9:18 AM No comments:

Fact: In 1983, I was hauled up on the stage of a magic show to have swords stuck through my neck.

Fact: Thirty years later, I found myself on the stage of a magic show, this time to participate in a little “arts & crafts” segment.
Fact: Both experiences were equally thrilling and both left me without a shred of a clue as to how the tricks were performed. 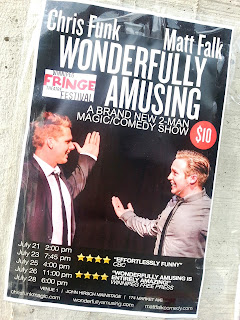 Last week, the Mascot and I had the pleasure of seeing the Fringe show “Wonderfully Amusing” at the John Hirsch Theatre. Did it live up to its name? Absolutely. The show was funny, clever, fast-moving (but not too fast-moving), and hugely entertaining. Comedian Matt Falk and Magician Chris Funk were hilarious and engaging and well-deserving of their standing ovation.


I was amazed by everything I saw, but the Mascot played it cool for a couple of tricks that he claimed to know how to do. (There were a few, though, that I could tell kinda blew his mind, which, to me, was worth the $10 that it cost to get in.) There were a few card tricks, a little slight-of-hand, some mind-reading, and lots of audience participation. Although no rabbits were pulled from hats, there was a bowling ball dropped from a sketchpad...


Our review: 4 big, enthusiastic thumbs up!

Free Press Review
FP Rating: ****
Average Reader Rating: ****1/2
Calling your show Wonderfully Amusing can be considered risky or cocky. Thankfully, comedian Matt Falk and magician Chris Funk are pretty much right on the money with the title of their 75-minute production.
The likeable pair play off each other like skilled veterans and both local performers get a fair share of laughs. There is plenty of audience participation during the illusions and no seat is safe if you want to avoid getting on stage.
Some highlights include a variation of Russian roulette, an arts and crafts segment, a bit of sleight of hand with a 10-dollar bill that is almost better in slow motion and a grand finale that earned them a well-deserved standing ovation on opening night.
And, of course, there are some card tricks, because what would a magic show be without a card trick? Funk asked. “Original,” Falk deadpanned.
Wonderfully Amusing is entirely entertaining.
— Rob Williams
Posted by Unknown at 2:01 PM No comments:

This past weekend, I took part in Winnipeg’s “Color Me Rad” event at Assiniboia Downs. It was the first colour-run for our city, and based on what I had read from friends who had participated in similar runs, I knew that I had to do it. Plus, a portion of proceeds went to Camp Manitou, a place that is near and dear to my heart.


Despite a horrible traffic jam that caused me to miss my “wave”, I made it to the park in time to meet up with a friend who was fresh off her own run. 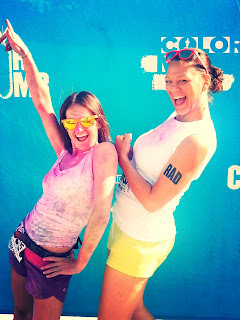 I joined up with a big, excited group at the start line and after a few minutes of instructions and banter by the MCs, we were off! The route took us around the paved areas Downs park and then, once we were past the first colour-bomb station, out through an adjoining field. The colour stations were set up every kilometer, which was a fun way to count-off the legs of the race. At each station, we were either pelted with handfuls of coloured cornstarch, or sprayed with water-based paint. It was fun to see everyone get progressively more colourful, as most of us started in white. 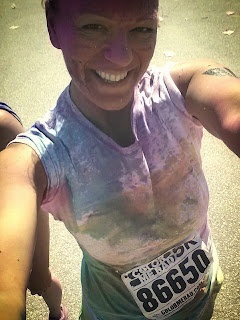 The “race” itself was unusual not just for the colour aspect, but because it was the least competitive running event that I have ever witnessed. All ages, shapes, sizes and abilities turned up and took part… and it wasn’t even timed. I ran the whole 5k, but I would say that the majority of participants walked the route after the first kilometre. The weather could not have been better – not too hot, not too windy – and, although the ground was a little bumpy in places, the route was pretty easy to navigate. 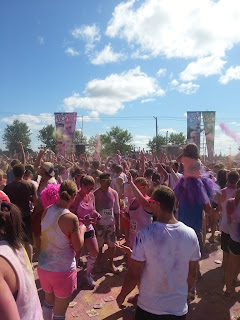 Once we were across the finish line, we were given water, our pictures were taken, and we had more opportunities to get coloured-up at the “colour party” dance party. Oh, and there were free McDonald’s frappe samples for those who like that sorta thing. After hanging out for a couple songs, and getting even pinker in the process, I headed home and began the fun (and surprising! Who knew my toes would be purple?) process of getting clean again.
Posted by Unknown at 4:21 PM No comments: