Hostess, I hardly knew you.

Growing up in the 70s with a healthy obsession with comic books, I was no stranger to the ads for Hostess products. Twinkies, Snowballs, fruit pies, and the chocolate cupcakes (with their iconic squiggle of icing) were everywhere - even in ads disguised as comic strips. It was brilliant advertising; how could you not want the same treats enjoyed by your favourite superheroes and the gang from Riverdale? The problem was, we didn't have them up here in Canada. And, if we had anything similar, I wasn't allowed to have them. All I could do was imagine the wonderful, sugary goodness and hope that one day, on a trip to the States, I would be able to catch my parents in a moment of weakness and finally get to try a much-coveted treat.

Even though we took many car-trips to the US and stopped at countless gas stations and supermarkets, I never once had a Hostess treat. It's not that we didn't eat junk food; it's just that we didn't eat *that* junk food. Even today, at 40 years and 3 months old, I have never had a real* Hostess Twinkie, Sno Ball, Cupcake or Fruit Pie.

So, with the recent news of Hostess' bankruptcy, I kinda feel like I've lost a little imaginary piece of my childhood. It's not that I loved Twinkies et al, I just loved the idea of them. Kinda like how I coveted Sea Monkeys, all the while knowing that I would never have any.

If you are like me and didn't get to try a Hostess treat before the curtain came down, or if you have eaten them all your life and loved them, check out my friend Annie's baking blog, With Sprinkles on Top. She has recipes for look- and taste-alikes of all the Hostess favourites. The pink Sno Balls look amazeballs!

*There was the time that I used the McSweeny's "cream filled cakes" to make dessert sushi for the Mascot's birthday, but I don't recall if I tasted them or not...

Forget James Bond and the teenagers that sparkle. This looks way better.

And, yes, that is Paul Rudd.
Posted by Unknown at 8:00 AM No comments:

Some kids play hockey; some kids join the football team; my kid has chosen improv as his "sport"... and I can't say that I am in the least bit upset about it. First of all, I'm not getting up at 4:30am to drive my kid to a freezing cold rink, or spending my Sundays watching him get tackled and knocked around. No, mine is a life of evening performances, cash bars, and general hilarity. (Plus, as a former drama-nerd and high school improv-er myself, I kinda like seeing that the apple didn't fall far from the tree.)

As part of his (ahem) educational development, I took him to a performance by the Dungeons & Dragons Improv group last night at the Gas Station Theatre. The crowd was young, hip, and wildly appreciative of the hijinks* on stage. The Mascot, of course, was generally horrified at the prospect of being spotted with his mother, despite the fact that he was quite happy to dine with me at Unburger just moments earlier. At one point he spotted a group of friends and tried to ditch me, but, alas, there were no empty seats up front... so he was stuck with his clapping, cheering, and giggling ma. Poor kid. 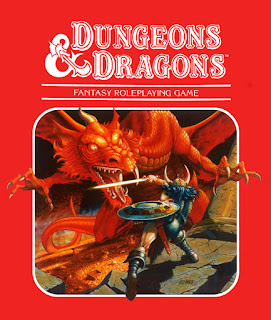 Based on the uber-nerdy role-playing game, the show was nothing short of hilarious. Like, beyond funny at times. The scenes were set by the Dungeon Master, and played out by a cast of characters that included a king, an evil doctor, a garden gnome, a minotaur, and a neutered cat (complete with protective cone), among others.

The show was 2 hours long, with the second half following the intermission "because it is scientifically proven to work better that way" and didn't lag at all. Even the awkward moments that can sometimes derail an improv show were handled beautifully. And, as every troupe worth their swords (or, rather, man-blades) knows, you can always throw in a fight scene or a dance-off vs the Rave Troll. I mean, why wouldn't you?

I can't wait to see the show again, and hopefully before next year's Fringe Fest. In the meantime, I'll be watching the group's website for upcoming shows (and resisting the urge to write fan-fic about Cosrow the Terrible).

*Nothing makes me sound older or less-hip than using the word "hijinks", amiright?
Posted by Unknown at 9:14 AM No comments:

My writer's block and my nagging need to write a blog post are waging a full-on war in my head. So much to say, and yet, as soon as I sit down with my laptop, I got nothin'. Nada. Zip. Zilch.

A couple of the ideas are fantastic...especially "curate existing content" and "have someone write a guest post", but that doesn't really solve my problem, now does it? 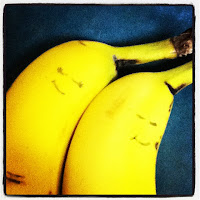 "Tell me, what is it you plan to do with your one wild and precious life?"
~ Mary Oliver

...or bite my tongue about current events...

Yup. If I do all that, I'll have enough to hit "publish". It's not pithy or especially interesting, but you smiled when you saw the bananas, didn't you?

Another blog, another adventure!

Once upon a time, *this* was my crafty blog, but this past summer, during a little domain name purchasing spree, I decided to move all matters of paint and fabric (and wood and metal and paper and yarn) over to a fresh new blog. Updates are few and far-between at this point, but that just makes them special. (Or, at least, that's what I am telling myself.) 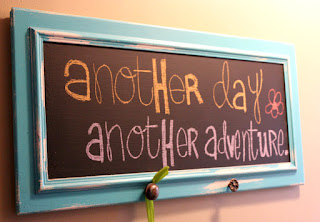 To read the story of Jenn's chalkboard, please pop over to Small Craft Warning.
Posted by Unknown at 9:02 AM No comments: