The Tweed Ride, despite its old-timey appearance, is a fairly new phenomenon. Started as the “Tweed Run” in jolly old England (London, to be exact) in 2009, Tweed Rides around the world have been quickly gaining in popularity.

While not as large as the London event, which numbers in the hundreds, the Winnipeg ride had itself a very good showing this past weekend. Approximately 40 riders of all ages and degrees of tweediness gathered at Assiniboine Park shortly before 2 pm this past Sunday to admire each other’s finery before setting off, en masse, for downtown.

For the occasion, I wore a fetching sleeveless brown knit dress (vintage), a jaunty beret (new), brown, black and gold diamond-patterned scarf (vintage), lady-like yellow gloves (vintage), argyle socks (new) and sensible brown oxfords (new). I had a cute little brown and camel houndstooth jacket with me, as well, but it stayed in my bike basket for the entire day, due to the unseasonably warm temps. 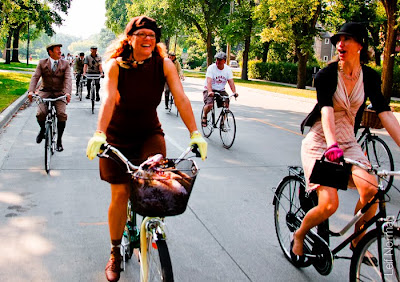 The ride itself was quite leisurely and lots of fun. As this year’s ride was part of the “Cyclovia/Manyfest” celebrations, we had a marked route and, with the exception of one stretch of Wellington Crescent close to the park gates, we were free to amble along, waving and shouting such pithy statements as “Hip-hop cheerio!” “Jolly good show, Gov’ner!” and “F*ck prohibition!” (The latter of which I was later informed was historically inaccurate, to which I replied “F*ck accuracy!”)

Once we arrived downtown, we posed for a group shot on the steps of the Legislative Building, and then made our way to Danalvert for croquet and an impromptu picnic. 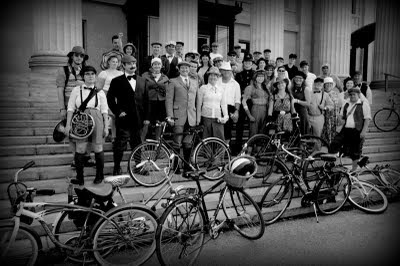 Plans for next year are already starting to brew, and include an earlier start time and a possible kick-off tea. I, for one, will be spending the next 12 months planning my outfit and searching for a suitable flask. For non-alcoholic refreshment, of course.

There are plenty of great photos of the Winnipeg Tweed Ride on Leif Norman’s site, as well as on the official WTR Facebook page.
Posted by Unknown at 8:50 AM No comments:

The mascot and I have a new little ritual. A couple of nights each week, we eat dinner on the couch and watch some of the ridiculous programming on TLC. It’s all pretty bad, but we’ve narrowed it down to a couple that we can stomach: Toddlers & Tiaras and Outrageous Kid Parties.

Toddlers and Tiaras is entertaining, but a little (ok, a lot) disturbing. I can’t believe the things that these parents do to their children, all in the interest of winning a giant, gaudy trophy and an oversized, gaudy crown. (Ironically, there are no “tiaras” to be won on Toddlers & Tiaras…just big, ugly headpieces that vaguely resemble a bejeweled version of Toronto’s city hall.)

The problems that I have with T&T are many, but it isn’t enough to get me to stop watching. Yet. Until that happens, I will continue to watch, holler at the ridiculous behavior of the parents, roll my eyes at the outfits and the “talent”, and congratulate myself for having the good sense not to get my own child involved in such a spectacle. For the most part, it’s harmless…in the same way that pet snakes are harmless.

Last night was the first time that I have had to walk out during one of our “tv dinners”, though. We were into our second episode of the evening of Outrageous Kid Parties and I simply could not take another second. The first episode had been about a woman who threw an all-out, Egyptian-themed backyard extravaganza for her 5 year old daughter. Besides the tens of thousands spent on décor, food and (ahem) entertainment, her gift to her mini Cleopatra was a necklace and earring set that cost the equivalent of what I would spend on 6 weeks of summer camp for my own child. But, if you wanna piss your own (or, your husband’s) money away on one afternoon of DJs, belly dancers, tarot card readers and a giant sandbox, then who am I to judge?

The second episode, however, really got me riled up. The woman, a single parent of a 10 year old boy, wanted to throw her son a Hawaiian-themed party, complete with a $5000 cake. Top prepare for the shin-dig, they took hula lessons (which he hated), spent an hour or so getting pwned by a surf-simulator (which he never fully grasped), went for detoxification treatments (what?) …and that’s where they lost me.

Surprisingly, it wasn’t the money being thrown around, even though they spent almost half a year’s grocery budget on CAKE. No, it was the fact that during all of these “fun” activities, the kid kept saying over and over “I don’t want this.” “I don’t need this.” “I am uncomfortable being the center of attention.” “I am shy.” But the mother didn’t hear a word of it. She just kept pushing and pushing and more, more, more. So, out of respect for the kid’s wishes, I bailed. I switched off, hugged my kid and did the dinner dishes.

It was, after all, the maid’s night off.